This is a set of four Russian pronoun dice, four number dice and 26 verb workcards, which is enough for four small groups of learners to practise conjugating up to 156 Russian verbs.

To practise six different verbs, choose a workcard, throw a pronoun dice and a number dice and conjugate one of the verbs according to the pronoun and the number. Here is an example: 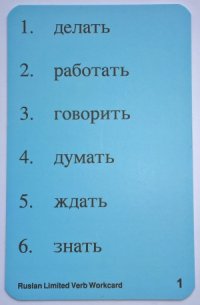 
To make the activity more challenging you can have a noun that has to be used with the answers. In the example below, your noun could be школа:


The game comes with cards, dice and an instruction leaflet in a small plastic box 10 x 6 x 4cm.